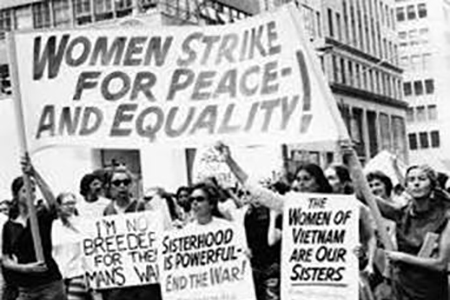 It Was 50 Years Ago Today:
Reliving 1968 September

Friday, Sept. 19, 1968
Just saw “2001: A Space Odyssey.” Fantastic film! Just imagine if it was TRUE that we could become “star children!” Born into a universe of endless time and space with an eternity to learn, expand, grow. Incredible!

Monday, Sept. 22, 1968
My darling Johnny took me to lunch. I’m so lucky to have such a supportive and loving husband!

Friday, Sept. 27, 1968
I’ve been painting again—very organic shapes and somewhat Surrealistic. Have been looking at [Yves] Tanguy. Looking for ambiguity—objects floating and swirling but the space is here, close; there, infinite. I keep re-thinking the imagery of “2001” and wondering how I could incorporate “time” into my painting. Hmmmm…

Monday, Sept. 30, 1968
Can’t decide what to do. John is going to a conference in Minneapolis next week and I don’t know whether I should go along or stay here with little Chris. I could leave him with Helen [our usual babysitter] at her farm. He always seems to enjoy visiting her and seeing all the animals. But I don’t want to leave him for five days! I guess I’ll stay home. Not like the conference is in, say, San Francisco…

And in the larger world…

September 7, 1968
Women’s Liberation groups, joined by members of New York NOW, target the Miss America Beauty Contest in Atlantic City. The protest included theatrical demonstrations including ritual disposal of traditional female roles into the “freedom ashcan.” While nothing was actually set on fire, one organizer’s comment – quoted in the New York Times the next day – that the protesters “wouldn’t do anything dangerous, just a symbolic bra-burning,” lived on in the derogatory term “bra-burning feminist.” This was the event from which the myth of “bra-burning” feminists was created by the press, distorting the early image of the movement.

Article in The Gainesville Sun:

The artist and the environment:
using art to save Florida’s iconic springs
by Mallory O’Connor