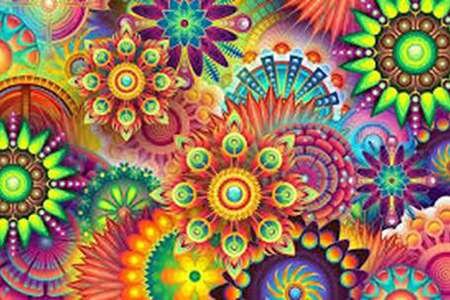 Went to Wilkersons’s [David and Laurel Wilkerson, students at Ohio University] to listen to a tape we just got from Frank Goad—Really a trip! The atmosphere at Wllk’s was just right—a little grass, some incense, dim lights, excellent audio equipment. Just right for listening to Frank’s latest. The first side was about the war—lots of fine protest—speeches, planes, bombs–chilling! The other side was titled “Notes of a Drug-taker.” Lots of commentary on the criminalization of psychedelic drugs and the possible reasons for their suppression. God forbid people should have a spiritual experience! Oh yeah, and Nixon won the election. No big surprise there.

Maybe because of the atmosphere or the general ambiance of the evening I had remarkable dreams. Very ornate and exotic—mirrors, Baroque furnishings, crystal carvings, vivid colors—fuchsia, gold, violet, turquoise, fur and metal grillwork. I want my next house to look like that!

A rather important discovery that might have some significance. Nothing spectacular, but important in a funny little way. We were talking about Jim Eldridge (artist/mystic in residence here) and were disbelieving about his age being 47 when he looks more like 25. Someone asked, “When was he born?” and I answered, “I think he’s forgotten.” The conversation continued but I stayed silent thinking, “That’s an interesting idea. If you ‘forgot’ when you were born would it mean that you wouldn’t get old because you didn’t realize that you should?” I recently read an article that said that a large % of aging is psychological and not physical. Perhaps then it would be better to forget when I was born and simply look at things not as a year-to-year phenomena (which is, after all, an arbitrary arrangement of measurement) but rather as a continuum, an ever-changing life process with no specific measuring sequence. Much more positive, I think.

November 13, 1968
To continue from yesterday: I don’t think we have any idea what “time” is or how it operates. Things, experiences that “seem like yesterday” really ARE even if they happened years ago. Does memory defy time?
What am I? Being.
Who am I? Being.
What will I become? Being.
I exist and experience around a central core of “being-ness”

And In The Larger World…

November 14, 1968
National Turn in Your Draft Card Day is observed with rallies and protests on college campuses throughout the country.

November 26, 1968
After stalling for months, the South Vietnamese government agrees to join in the Paris peace talks.